Press Release of Kick Off Event-Workshops in Athens 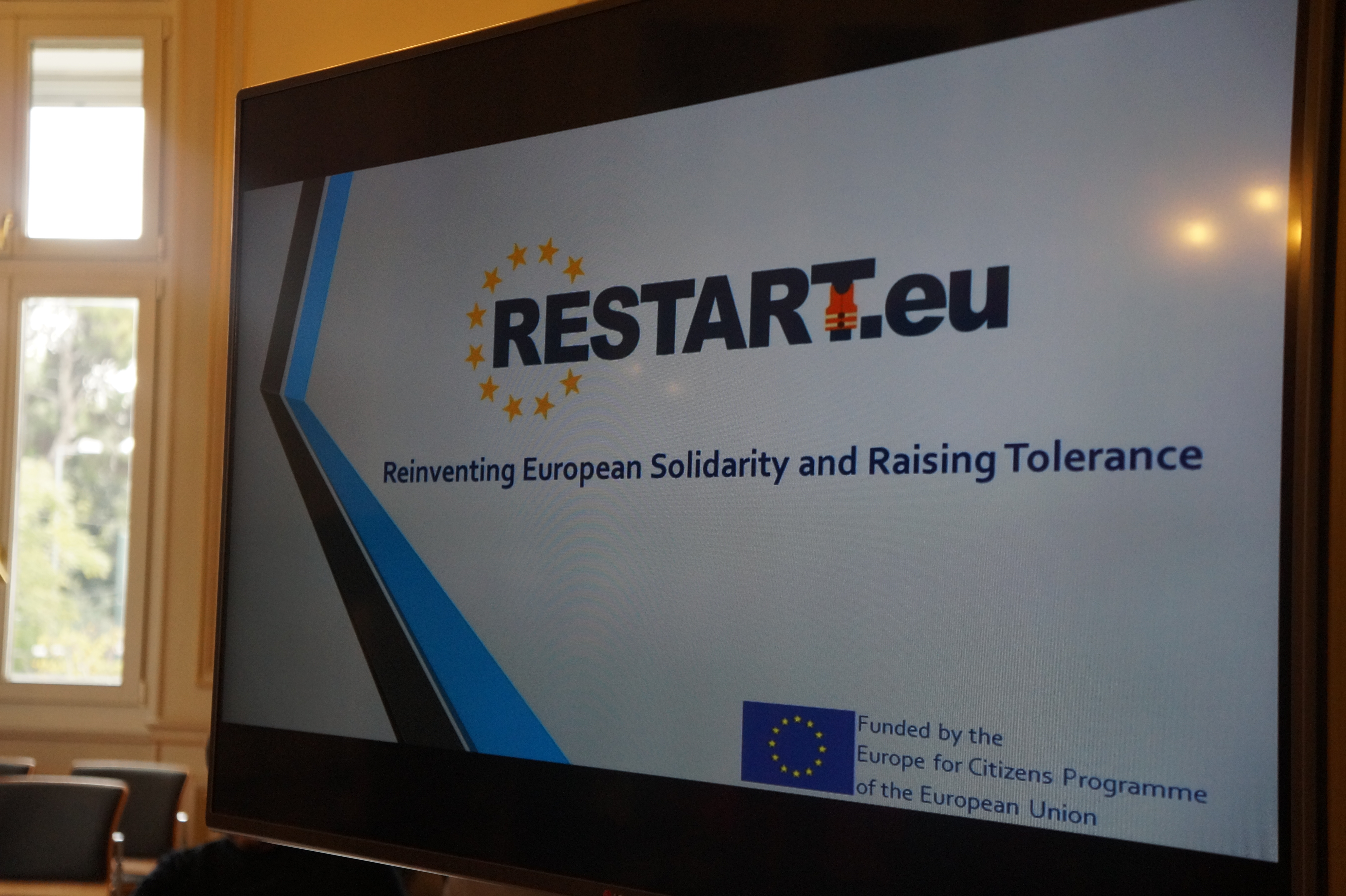 The opening ceremony of the project “Reinventing European Solidarity and Raising Tolerance” – RESTART, which the Institute of Research & Training on European Affairs is implementing in the framework of the European Programme Europe for Citizens, was successfully held on Monday 7th November 2016 at 10:30-11:30 at the Information Office of European Parliament in Athens with the participation of 65 participants. The Ceremony was covered by media and newspapers with exclusive interviews of the Project manager and the speakers.
The Opening Ceremony began with the welcoming speech of Mr. G. Antonanakis, President of Institute of Research & Training on European Affairs and Project manager of the project, who introduced the speakers. Mr. Antonakakis briefly mentioned the aims and goals of RESTART, expressing his wish that this project will contribute in establishing an effective dialogue with the citizens, as well as raising their awareness about the refugee crisis
Afterwards, Mr. Tsoutsoplides, Press Officer of the European Parliament Information Office in Athens, through his speech, encouraged the implementation of such actions and especially in the facilities of the Information Office of the European Parliament.
Mr. Tsoutsoplides speech was followed by the speeches of Mr. P. Karvounis, Head of the Representation of European Commission in Greece, Mrs. E. Vozemberg, MEP with the European People’s Party, Mr. M. Kyrkos, MEP with the Progressive Alliance of Socialists and Democrats, Mr. L. Papagiannakis, Vice-Mayor of the Municipality of Athens for Migrants, Refugees and Municipal Decentralization, and last but certainly not least, Mr. A. Karvounis, Head of Europe for Citizens Contact Point (Greece) at the Ministry Interior.
All the speakers talked about the Refugee Crisis by mentioning facts, data and their personal experience on the issue, which they have gained through their serving positions, as well as by referring to the policy that European Union has followed and its wrong aspects. The speakers expressed their will to personally discuss with the participants about the refugee crisis, its causes, its results and measures that could help face the crisis, underlining that youth is the driving force to face this humanitarian crisis and not that crisis alone. In the end, the guest speakers declared their will to actively participate in the other actions included in RESTART project, as well as in similar initiatives, aiming to the final solving of the Refugee Crisis through voluntary initiatives with young participants.
Right after the end of the Opening Ceremony, between 12:00-15:30 an interactive workshop took place, in which the participants divided in groups had the chance to discuss the causes and the effects of the Refugee Crisis, underlining the challenges and the difficulties that the welcoming countries as well as the refugees that arrive to them have to face and concluding in proposals on how to deal with those challenges. Among the participants were students, representatives of Non-Governmental Organizations, as well as volunteers that have participated in actions that provided help to the refugees, either on their own initiative or as part of an organization. The participants managed to easily respond to the needs of the workshop and contributed in the formation of a draft paper that will be included in the final Policy Paper that will be formed after the conclusion of the actions of RESTART project. The Policy paper will be presented in the European Parliament through the advisory status of I.R.T.E.A..and all partners.