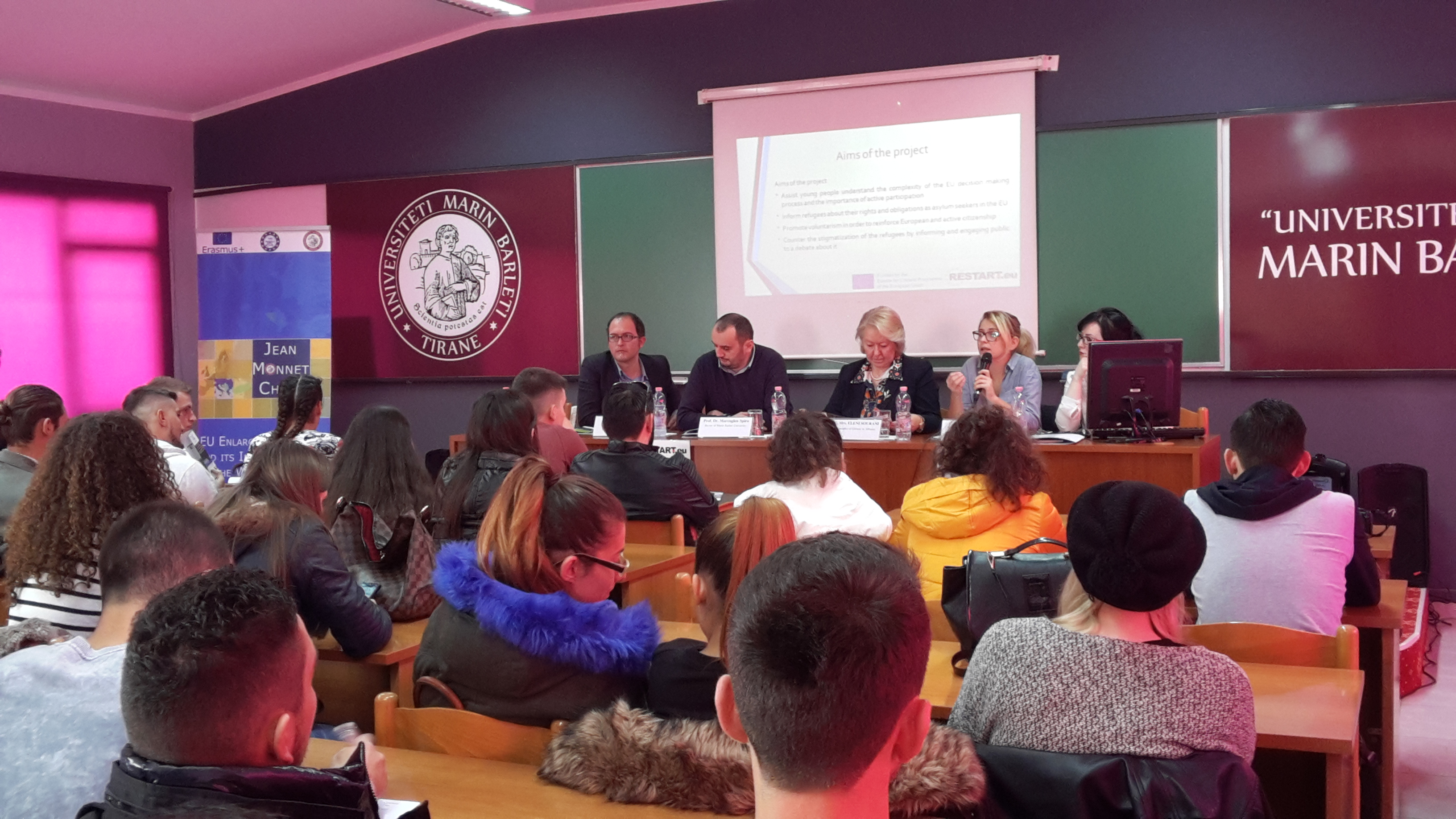 The first event in Tirana, Albania of the project “Reinventing European Solidarity and Raising Tolerance” – RESTART, was successfully implemented by the Albanian Institute of Public Affairs in the framework of the European Programme Europe for Citizens. The Event was held on Thursday 17th of November 2016 at 10:30-14:30 at the premises of the “Marin Barleti” University, while the Project’ Consortium consists of the Institute of Research & Training on European Affairs, the Cyprus Youth Council and VoteWatch Europe.
The participation was high with 58 participants including young attendants were actively involved during the Event.

The discussion was facilitated by Dr. Dorian Jano, Jean Monnet Chair at Marin Barleti University, while among the distinguished guests were Prof. Dr. Marenglen Spiro, Rector of the Marin Barleti University and H.E. Mrs. Eleni Sourani, Ambassador of Greece in Albania.
The Opening Ceremony began with the welcoming speech of Prof. Dr. Marenglen Spiro, Rector of the Marin Barleti University, who welcomed the speakers and participants to the event and expressed his thoughts on the importance of youth involvement in such actions.
Afterwards, H.E. Mrs. Eleni Sourani, Ambassador of Greece in Albania, made a statement on the refugee crisis and how it has affected Greece over the past years. H.E. Mrs. Sourani explained to the young participants the most important and challenging aspects of the crisis and its implications for the Balkan neighborhood.
Dr. Ervis Martani, UNESCO Chair at Marin Barleti University, spoke about multiculturalism and human rights in the Balkans. Dr. Martani briefly, yet successfully helped the participants understand the importance of multiculturalism for the region and the actions undertaken by international bodies such as UNESCO and the EU in order to protect it.
Lastly, Mrs. Savvoula Oikonomou, Head of Funds and European Programs Department at the Institute of Research and Training on European Affairs, presented the details of the project, its inspiration, objectives and forthcoming activities. The participants seemed particularly interested in the volunteer program of the project and posed questions on it.
Dr. Eurona Leka, Lecturer at Marin Barleti University assisted on the interpretation in English.
Right after the end of the statements an interactive workshop took place, in which the participants divided in groups had the chance to discuss the causes and the effects of the Refugee Crisis, underlining the challenges and the difficulties that the welcoming countries as well as the refugees that arrive to them have to face and concluding in proposals on how to deal with those challenges. The participants were comfortable and apart from sharing their opinion on the issue, they shared stories and experiences on the issue. The participants were young students of Universities located in Tirana.
The participants managed to easily respond to the needs of the workshop and contributed in the formation of a draft paper that will be included in the final Policy Paper that will be formed after the conclusion of the actions of RESTART project. The Policy paper will be presented in the European Parliament through the consultative status of I.R.T.E.A. and all partners.