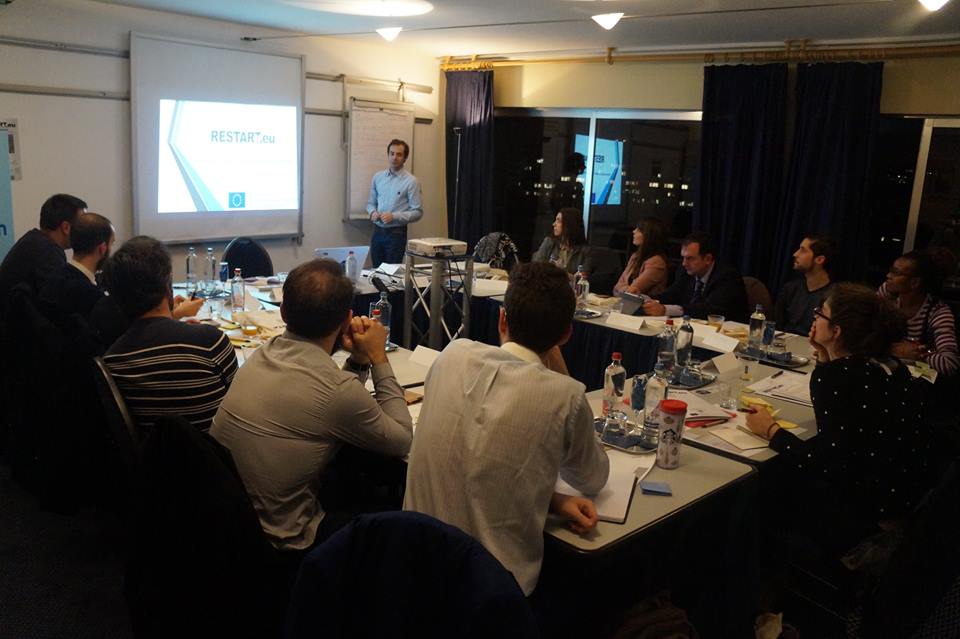 The first event in Brussels, Belgium of the project “Reinventing European Solidarity and Raising Tolerance” – RESTART, which the Institute of Research & Training on European Affairs is implementing alongside the Albanian Institute of Public Affairs, the Cyprus Youth Council and VoteWatch Europe in the framework of the European Programme Europe for Citizens, was successfully held on Thursday 24th of November 2016 at 18:00-21:00 at the premises of the First Euroflat Hotel.

The event was coordinated by VoteWatch Europe.
The discussion was facilitated by Mr. Mohamed Fahmi, Project Coordinator at VoteWatch Europe.
The Opening Ceremony began with the welcoming speech and presentation by Mr. Mohamed Fahmi, who welcomed the 25 participants and presented the project, its goals and expected impact. The participants seemed particularly interested in the expected policy paper of the project and posed questions on it. Ms. Despina Papadaki, Secretary General of the Institute of Research and Training on European Affairs presented the leading organization and the main objectives of the project, while also welcomed the participants and highlighted their engagement in the project.
Afterwards, Mr. Fotis Zygoulis presented the local government’ principles on managing the refugee crisis in Greece, the obstacles and the necessities on changing the perspectives of the local governors on the issue, while also had a very fruitful discussion with the participants.
Lastly, Mr. Mohamed Fahmi, Project Coordinator at VoteWatch Europe, explained to the participants the workshop procedure and facilitated the discussions.
Participants were highly engaged in the discussions of the Workshop and presented their personal experiences and views on the refugee crisis, its impact at the European level, the European Institutions reaction and proposed ways to facilitate the issue and the integration of refugees to the European society. Among the participants were experts from the Greek MEPs who serve as Assistants in the Parliamentary Committees and highly academic profiled young persons, while some of them had worked in the field in cooperation with EU NGOs.

Moreover, participants raised concerns on the management of refugee flows from the Member States and expressed their views on how the EU should better assist on these Member States and promote policies for the better respect of human dignity and securing the non-violation of human rights in the European region.