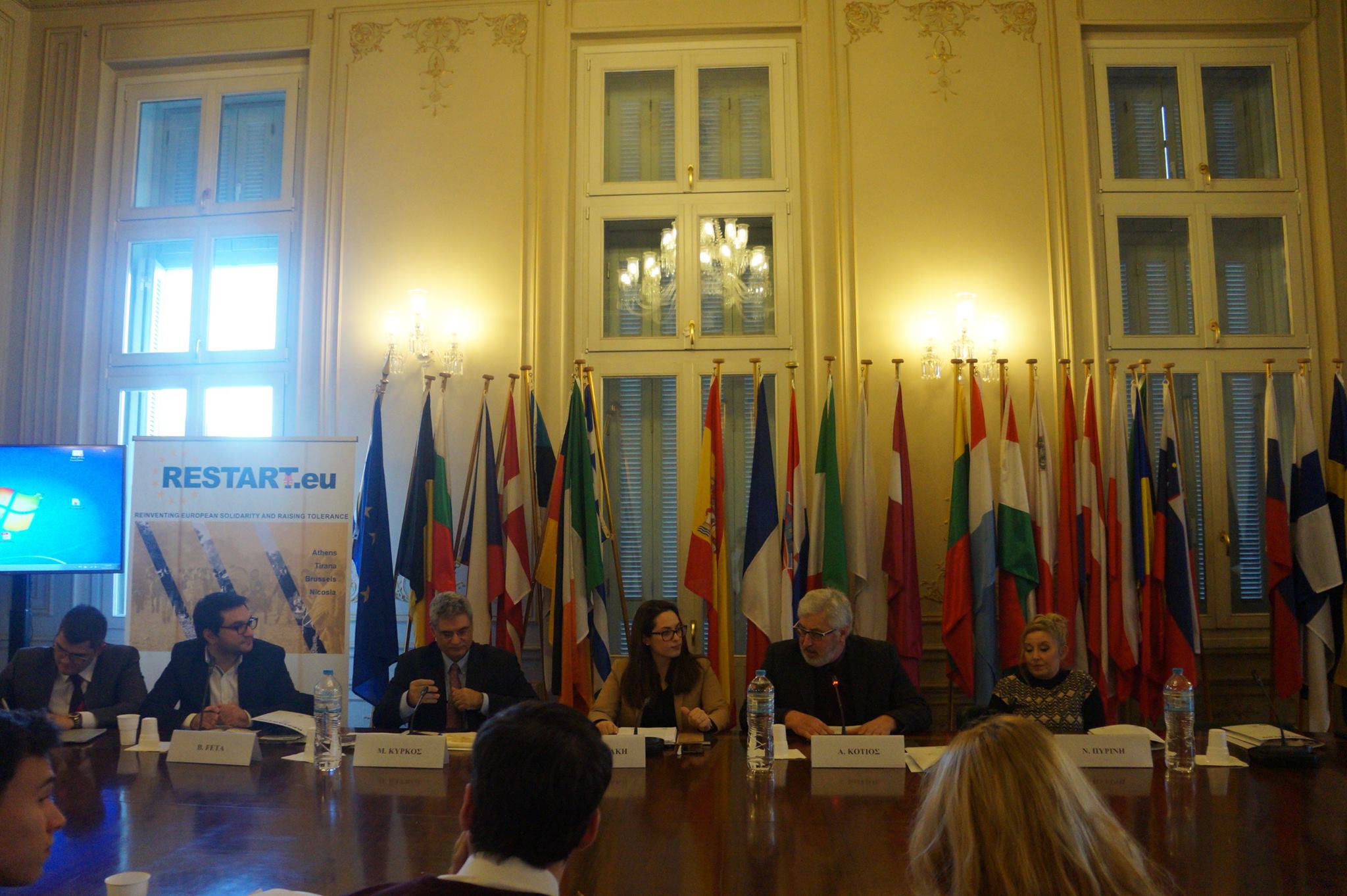 Participants discussed with the honorable guests on migration and the impact at the national and european level. The event was dedicated to promoting debate and fruitful dialogue between civilians and civil society’ members, representatives of agencies, institutional representatives and academics on refugee crisis and debate at a national and European level. Among the distinguished speakers involved in the two-day Structured Dialogue, hosted by the EPIO in Athens, were Mayors, MEPs, MPs and young people, while the presentation of the “4.1 Miles” Oscar-nominated documentary took place. The Structured Dialogue was split in four different,  but at the same time complementary to the main topic of discussion, the refugee crisis and its immpact in Greece and Europe at a regional and societal level.

On the second day, the discussions begun under the third Thematic focused on the curerent capacities to manage refugee flows at local and national level with Mrs. Papadaki, Secretary General of I.R.T.E.A. as the facilitator of the discussions. The distinguished speakers of the panel were Mr. Papatheodorou, Member of the Hellenic Parliament with PASOK Political Party, Ms. Poulou, Mayor of Livadeia and Mr. Papagianakis, Deputy Mayor of the Municipality of Athens on Immigrants, Refugees and Decentralization who highlighted the difficulties at the local level of managing the refugee crisis. Moreover, the Mayor of Livadeia presented the best practise of refugee flows management in the city of Livadeia.

The last discussion panel was dedicated to the proposed solutions to the current situation of refugees in social and economic terms, with Mrs. Papadaki, Secretary General of I.R.T.E.A. as the facilitator of the discussions. The distinguished speakers of the panel were Mr. Kotios, Professor and Dean of the School of Business, Economics and International Studies of the University of Piraeus, Ms. Wozenberg, MEP with “New Democracy” Political Party, Mr. Kyrkos, MEP with “THE RIVER” Political Party, Mr. Feta, Assistant Researcher at the Southeast European Project of ELIAMEP, EU Policy Hub Albania and Ms. Pirini, Teacher for the Presentation of Child and Parental Sensitization Activity.

The participants actively interacted with the speakers, exchanged views and reflections, expressed their satisfaction with the opportunity provided to them to talk with this multitude of speakers with different scientific and professional interests, underlying the refugee crisis in Greece. Particularly positive impact was created by the contact of the participants with the invited Mayor of Livadia and the Deputy Mayor of the Municipality of Athens, aware of the local and social dimension of the subject, a well-known regional scientist, academics and teachers who implemented similar action for refugee in primary school students.